My friend @Julien_Mottet came across a very interesting paper while working on his Ph.D., and sent it to me. Here are my notes on Leverage Points: Places to Intervene in a System by Donella H. Meadows 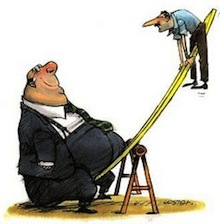 People believe in silver bullet, miracle cure, single hero, or the butterfly effect. Systems actually have such points of power which will be discussed in this post.

A small shift in one thing can produce big changes in everything.

People are very good at finding leverage points in system, but fail at pushing them in the right direction. They are not intuitive. One example given is that world’s leaders fixate on economic growth as the ultimate answer, but pushed to far it reinforces environmental destruction, resource depletion, urban deterioration, etc. 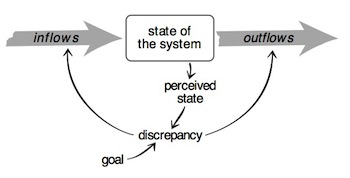 Exemples of state of the system (the amount of important stuff, the stock):

From there you have inflows and outflows which increase/decrease the stock. They obeys laws of conservation and accumulation. Policy variation on inflows or outflows take time to have some effect on the stock.

The goal is where you want the stock to be, the discrepancy is the difference between the perceived state and your goal. This is information you use to act on inflows and outflows.

This is quite abstract. Let’s take an example. 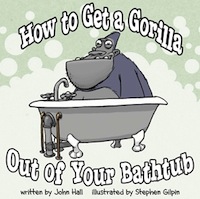 The system is now a bathtub, and you want to take a bath. Your goal is a desired level of water. So you plug the faucet and let the water rise until the discrepancy is zero, meaning that the level of water (perceived state) reached your goal. If the water rises too much, you can open the drain a little.

You have two feedback loops controlling your inflow and outflow.

NB: Both the goal and the feedback connections are hidden in your head, an external observer would take a while to figure it out only looking at the system.

Add now two taps, hot and cold, and add a second goal: water must be at 41°C. You are in a big house, and the hot inflow is served by a boiler three floors below (takes seconds to respond). The system becomes more complex and realistic, and it’s very hard for you to control precisely hot and cold inflows to reach your goal.

If you don’t have a bathtub, you still have a bank account. Just picture it as a bathtub where checks, deposits, interest, etc… affect your balance.

Negative feedback occurs when the result of a process influences the operation of the process itself in such a way as to reduce changes. Negative feedback tends to make a system self-regulating; it can produce stability and reduce the effect of fluctuations.

Here are the twelve places to intervene in a system compiled by Donna, in increasing order of effectiveness.

Basically the rate of inflows and outflows. Least effective as they don’t change behavior. People fight battles over them though. Parameters become leverage points when they kick off one of the following item in the list.

Huge bathtub with slow flows is different from tiny bathtub with very fast flows. Systems can be stabilized simply by increasing the capacity of a buffer, while maintaining flexible enough (huge buffer make the system react too slowly, and cost a lot to build/maintain).

10. Structure of material stocks and flows

A road system, the Baby-Boom, the lifetime of CFC molecules, etc. are structure of a system hard to change afterwards, the leverage point is to build it correctly the first time when possible.

9. Delays relative to the system rates of change

A shower connected directly to the boiler which takes 30 seconds to respond is very hard to adjust. You get oscillations from the delay in the feedback loop.

Very intense part here, let’s try to sum it up. Some of the negative loops can be inactive (yet powerful) such as emergency cooling system in a nuclear plant or your ability to sweat or shiver. Those aren’t usually visible but really important for the long-term welfare of the system. One big mistake would be to cut cost by removing them.

Markets worship price to keep demand and supply in balance, so the more the price is kept clear, unambiguous and truthful, the more smoothly markets operate. Companies and Governments play with the price and weaken the feedback power by twisting information in their favor (subsidies, taxes, etc.), thus the real leverage point is to have anti-trust laws, pollution taxes, truth-in-advertising laws.

Democracy has elections as a negative feedback loop between the people and their government. Yet billions of dollars are spent by leaders to bias the information flow to people.

To sum up, if the impact increases in strength, the feedback have to be strengthened too. Examples are:

Positive feedback loops are sources of growth, explosion, collapse, and will destroy systems. Usually, a negative feedback loop kicks in before, for instance the flu will run out of infectable people.

Many positive feedback loops in society reward the winners of a competition with the resources to win even bigger next time. […] Rich people collect interest; poor people pay it. […] Rich people give their kids inheritances and good educations; poor kids lose out.

You can set up negative loops such as income tax, inheritance tax and high-quality public education programs to balance the positive loop above. But…

If rich people can buy government and weaken, rather than strengthen those of measures, the government, instead of balancing “success to the successful” loops, becomes just another instrument to reinforce them!

There was this subdivision of identical houses, the story goes, except that for some reason the electric meter in some of the houses was installed in the basement and in others it was installed in the front hall, where the residents could see it constantly, going round faster or slower as they used more or less electricity. With no other change, with identical prices, electricity consumption was 30 percent lower in the houses where the meter was in the front hall.

Basically, a leverage point could be a new loop delivering information to a new place. Missing feedback is a common causes of system malfunction. Humans have a tendency to avoid accountability for their own decisions, thus so many feedback loops are missing.

Suppose that the politicians who declare war were required to spend that war in the front lines.

Rules are powerful upon a system, changing them is a high leverage point. Lobbyists know that. What are the rules of your system, who has power over them?

In Biology, we have evolution. In Human society we have technical advance or social revolution. The ability to self organize (using one of the item above in that list) makes a system resilient, as it can survive to almost any change with a mutation.

When looking at self-organized system (Nature, Markets, etc…), one can see a divine creator, but usually the complex result comes from basic self-organizing rules. Think of DNA, replication is a simple process, yet the impact is just huge.

Self-organization is basically the combination of an evolutionary raw material - a highly variable stock of information from which to select possible patterns - and a means for experimentation, for selecting and testing new patterns.

Again, think of DNA (the stock) and Biodiversity. Or Books, Brains and creativity. Human cultures. Losing a part of the stock makes the system less resilient.

Insistence on a single culture shuts down learning. Cuts back resilience.

Any system […] that systematically scorns experimentation and wipes out the raw material of innovation is doomed over the long term.

3. The goals of the system

If a specific goal is set, then all of the above can be twisted to conform to that goal (think of Totalitarianism).

Even people within systems don’t often recognize what whole-system goal they are serving. To make profits, most corporations would say, but that’s just a rule, a necessary condition to stay in the game. What is the point of the game?

To increase stockholder wealth, most everyone would say, and that is a powerful, behavior-shaping goal. […] To grow, to increase market share. […]. It’s the goal of a cancer cell too. Actually it’s the goal of every living population, and only a bad one when it isn’t balanced by higher-level negative feedback loops.

Changing the goal of a system is a high leverage point, and usually Heroes come and try to do so.

2. The mindset or paradigm out of which the system arises

Copernicus, Kepler, Einstein managed to change paradigms of the system.

Changing paradigm is powerful, but dangerous. It lead some to crucifixions, burnings at the stake, nuclear arsenals. How do you change paradigms? To paraphrase Thomas Khun:

You keep pointing at the anomalies and failures in the old paradigm, you keep speaking louder and with assurance from the new one, you insert people with the new paradigm in places of public visibility and power. You don’t waste time with reactionaries; rather you work with active change agents and with the vast middle ground of people who are open-minded.

1. The power to transcend paradigms

After all, no paradigm is true, everything is just a human construction.

It is in this space of mastery over paradigms that people throw off addictions, live in constant joy, bring down empires, found religions, get locked up or “disappeared” or shot, and have impacts that last for millennia.

I like this essay very much because the system model is very simple yet the discussion around leverage points very powerful. I will keep this blog note as a reference point for the future when I’ll have to deal with a new system.

If you try to fix the world, I hope this note will give you back some energy. Go!

Would you like to learn programming? I am CTO of Le Wagon, a 9-week full-stack web development bootcamp for entrepreneurs, and would be happy to have you on board!